An eye for detail and colour

The fish lying on ice at the market might shimmer silver or sport a dull red but a fish hauled from the cool ocean loses most of its colour – its washes of yellow or its blue stripes – about ten minutes after it has gasped the searing air.

Not only do fish give up their colour when they die, in life they switch it on and off in various parts of their body in some kind of communication, the intricacies of which we have yet to unravel. A fish can change its spots right before your eyes which creates a dilemma for an artist, particularly an artist used to the exactitude of botanical drawing.

The click of digital photography or whirr of film can make these changes and particulars apparent but at the start of the 19th century an artist wishing to paint a fish had to rely on an eye for colour, a good memory and meticulous methodology. Body shape could be preserved after death but markings were another matter.

The artist Ferdinand Bauer, best known for his botanical drawings, also drew and painted many fish. Some of these are collected in Ferdinand Bauer’s Natural History Drawings taken from the Zoological Specimens Collected on the First Circumnavigation of Australia by Matthew Flinders, Commander HMS Investigator 1801 -1803, a collection of 52 drawings of fauna of which the marine creatures comprise 22. The National Library of Australia has in its collection the fourth of 50 copies of a luxurious facsimile edition, published by Alecto Historical Editions in association with the British Natural History Museum, in 1997.

Bauer’s leatherjackets and mudskippers, his blue swimmer crabs and his Butterfly cod, sport their colours as though they swam alive as he drew them. We know, however, that he worked from caught specimens on the Investigator voyage.

Bauer’s illustration from the field, or the beach or boat in the case of his fish, was a triumph of organization and art. In Peter Watts, Jo Anne Pomfrett and David Mabberley’s An Exquisite Eye: The Australian Flora & Fauna Drawings 1801-1820 of Ferdinand Bauer (Historic Houses Trust of New South Wales, 1997), a description of his practice explains how he was able to reproduce his subjects so accurately under trying circumstances.

“…Bauer made life-size pencil sketches of the habit and parts of the plants and animals and numbered them according to a code of colour shades from a chart which he carried with him, a method he had used in the Mediterranean when working for [Professor John] Sidthorp. Such codes had been in use for a long time but it was Bauer who perfected the technique. The whereabouts of the code he used on the Investigator is not known. However, one of his earlier codes is preserved in the Real Jardin Botanico in Madrid. It has 7 rows of 20 numbered rectangular coloured strips. His later codes must have been much more elaborate because the Sibthorp drawings have numbers up to 250, and the Australian ones have from 1-999 plus added letters. Despite the speed with which these drawings must have often been executed and annotated with the code, only rarely are there mistakes in his colouring.”

Bauer’s Anoplocapros inermis, a funeral-rose mauve and grey confection gathered together with golden bands was caught at Thirsty Sound, Broad Sound, Queensland in September 1802. His mudskipper (Periothalmus sp.) a maudlin-looking fish, large mouthed and with protruberant eyes perched atop its head, was probably collected at Connor Creek, Keppel Bay in Queensland a month earlier. On that same day a Goby (Favonigobius sp.) was collected which Bauer rendered in basic silver but with purple body spots and purplish banding. Rainbow colours adorn its fins.

What is believed to be a Butterfly Cod (Pterois sp.), though it cannot be positively identified because the finray counts on the body do not correspond with the count of either of the two fishes it closely resembles, was probably collected at Strong Tide Passage, Queensland on 28 August 1802. Made a beautiful salmon pink with brown, wavy, vertical stripes, the fish sports dorsal fin spines which can inflict painful wounds, and oversized fins. It is one of very few Bauer drawings to show an anomaly in anatomy.

The beauty of Bauer’s drawings is complemented by their value to science. Weedy seadragons were caught at King George Sound in Western Australia in December 1801 and Bauer’s painting of Phyllopteryx taeniolatus showed a natural oddity – the male carrying a clutch of eggs under his tail. The drawings include not just the beautifully coloured whole fishes but detailed depictions of various parts of fish or crab. They were meticulous records of species when no specimen was available. Bauer’s parrotfish (Odax ocroptilus), is an example – Sir John Richardson based the first scientific description of the fish on this drawing as the specimen was not preserved. No record exists of where Bauer obtained this subject but today it is commonly found on the southern coasts of Australia.

There is no known portrait of Bauer and he seems to have left no diary of his journeys in Australia. His letters were few – only about ten are known to exist. But we do know something of the life of this artist who remained a bachelor until death.

Bauer’s was born in 1760 in Feldsberg, a town then in Austria which in history’s rearrangement of Europe has become Valtice in the Czech Republic. His father, Lucas Bauer, was a botanical artist and a gallery curator in the court of Prince Wenzel of Liechstenstein. Ferdinand was one of seven Bauer children, just an infant when Lucas died. The family’s court connections protected them and Dr Norbert Boccius, a priest and scholar at the court, took an interest in the education of the orphaned children, particularly in art pratice. He gave Bauer a commission to paint flower studies when he was only 15. By the time Bauer was 20 he was working with his brother Franz on the illustration for Baron Nikolaus von Jacquin’s Icones Plantarum Rariorum. This was followed by an appointment as natural history painter for Professor John Sibthorp of Oxford with whom Bauer travelled in the Mediterranean and England, producing drawings for the publication Flora Graeca.

By the time the Flinders expedition was mooted, Bauer had long experience and Sir Joseph Banks suggested he should be appointed botanical artist. Bauer was 41, much older than most of his fellow-travellers. Flinders, for example, was 27, as was the botanist Robert Brown, with whom Bauer was to work closely. Nevertheless Bauer was indefatigable, and drew and painted and extraordinary number of plants and animals on the voyage. Flinders’ honoured Bauer’s contribution by naming Cape Bauer in South Australia after the painter and there are, fittingly, many plants named for him.

When Flinders set off for England to get a replacement boat, the Investigator having proved unsuited to its task and unsound, Bauer and the Brown stayed at Port Jackson to work on material while waiting for Flinders’ return. Bauer traveled to the Hunter Valley and to Norfolk Island and continued to draw and paint the fauna and flora of the colony. Flinders, meanwhile, was imprisoned in Mauritius where he was to remain for years until his return to England in 1910. Bauer and Brown, once it became clear that the Flinders expedition was over, returned to England in 1805 aboard the repaired Investigator. They carried with them with many specimens to aid their work back in England.

Bauer spent the next few years working on illustrations for the Admiralty with Brown and on his own illustrations, readying them for publication. But interest in the Flinders voyage had faded and, of Bauer’s more than 2000 drawings from the Investigator passage, only about two dozen were published in his lifetime.

Disillusioned, Bauer returned to Austria where he died 1826. His work passed through several hands before ending up in museum and gallery collections. The illustrations published in the Alecto facsimile are in the British Museum of Natural History.

A version of this article previously appeared in The National Library News. © Jennifer Moran 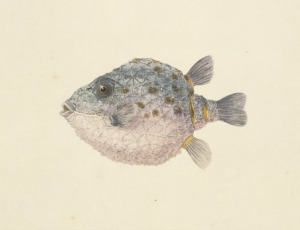