By Kirsten Tranter, Fourth Estate, 357pp, $29.99 Review by Jennifer Moran
In its themes of loss and friendship and the insidious power of secrets, Kirsten Tranter’s perceptive second novel has much in common with her first, The Legacy. But Tranter has a different agenda for the friends she gathers in A Common Loss.

Her narrator, Elliot, explains at the start of the second chapter: “This isn’t going to be one of those stories about a suburban boy seduced into a picturesque world of wealth and charm by a group of high-class eccentrics.”

The Legacy is a bildungsroman in which the narrator Julia comes through her experience wiser; the group of friends that is gathered in A Common Loss achieve no such epiphany. They may know more than they did a decade before, but they have no better way of navigating the world. The men in A Common Loss have known each other since college. They met each other disparately but gradually ended up as a group and were bonded by a secret. The five were together in a car that rolled when the driver, Cameron, swerved to miss a deer. They had been drinking and Dylan, who had drunk the least, claimed to have been driving, persuading the others to go along with the story.

After college they went on to successful careers – Dylan in publishing, Brian in independent film making, Tallis in banking, Cameron in a large legal firm and Elliot in the English Department of a reputable university.

Each year the group has met in Las Vegas for a couple of days to reminisce and relax, drinking and flirting with women and jousting with each other. Ten years on, things are suddenly different – Dylan is dead and Elliot, though grieving for his friend, is feeling that he has outgrown the group. He goes to meet the other three without much enthusiasm. It is not just that Dylan is no longer there to mediate the different relationships. Brian is bringing his new girlfriend, Cynthia, a graduate student who is researching imitation and authenticity for which Las Vegas, with its lurid distractions and glitzy facades, offers much material.

As the group battles to find its new pattern, Elliot’s perception of Dylan and the group unravels. Another shameful secret he shared with Dylan turns out to be just one of a batch of compromising solutions that Dylan had engineered or arranged for his friends.

While Dylan had never since held over Elliot his senior-year deception, he had not been so gracious with the other men. The knowledge he had of their misdemeanours and worse has left them resentful and wary. More dangerous than the group finding out about each other’s secrets is the possibility that they have been spread further and it is one of Dylan’s own secrets that makes that threat manifest.

Tranter builds the suspense of these stories well, picking apart Elliot’s certainties and insecurities to eviscerate the frail body of this friendship. As the group members wander between resorts and nightclubs and bars, Elliot is increasingly disoriented, caught up in half-assimilated grief and the overturning of his assumptions.

One of the joys of Tranter’s novels is the rich literary seam that she mines. The Legacy is infused with allusion to several other works of fiction.

The characters of A Common Loss are in a similar milieu but grapple with their literature, rather than glory in it. Elliot first meets Brian while struggling with Samuel Richardson’s Clarissa in a café. Tranter has chosen as her book’s epigraph two verses of Alfred, Lord Tennyson’s “In Memoriam A.H.H.” (melded to look like one) and the source of Elliot’s later shame is in his failure to come to grips with the long poem’s meaning. The book’s denouement is disappointing, the final secret a fizzle. Despite this, Tranter’s achievement is considerable; her writing polished and assured, her evocation of the nuances of friendship finely delineated. 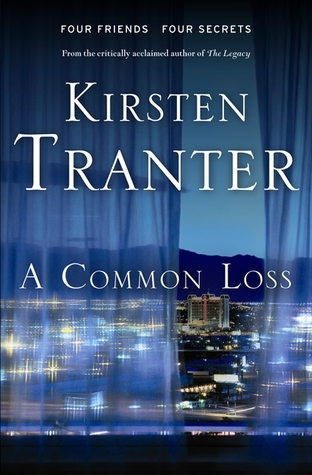