A catch for collectors

The Penguin Book of the Ocean

By Roger Swainston, Viking, 836pp, $125.00. Review by Jennifer Moran
Weighing a hefty new compilation in the hand, a collector of sea stories has the same quickening of the pulse that assails the collector of china or the hoarder of old coins at the second-hand stall at a country fair. Wary of being disappointed and impelled to fossick, the collector runs a practised eye through the contents looking for treasure.

James Bradley has placed several jewels among the stories, excerpts and poems in The Penguin Book of the Ocean. He has not shied away from old favourites – Joseph Conrad, Herman Melville and Samuel Taylor Coleridge appear in their dramatic familiarity – but he has compiled a collection that is broad ranging and studded with fresh talent. It is a gathering of sailors and scientists, poets and surfers, explorers and observers, creators and pragmatists.

The effect is like a community, sometimes talking about each other or old friends, sometimes introducing the reader to new acquaintances, and all in thrall to the ocean.

Several themes infuse the collection: the spirit of inquiry that has been an unbroken link through centuries of seafaring (though we have shifted that inquiry from what lies beyond the horizon to what lies beneath the surface); the adventure and danger that are to be found at sea; human interaction with nature and marine ecosystems; the mythology and symbolism of the ocean, how it haunts our subconscious and our dreams; and the physical connection we have with all living matter in its long, evolutionary association with the sea.

“To understand the ocean, to glimpse its meaning is, in other words, to understand ourselves, and by extension our place in the larger order of things,” Bradley writes in his introduction.

For the 44 writers in this collection, the ocean is backdrop, character, symbol or raison d’être.

John Steinbeck, best known for novels set in depression-ravaged farmlands, is an interesting inclusion with the excerpt from The Log from the Sea of Cortez, an account of a journey along the Californian coast with his friend, the biologist Ed Ricketts. The ocean, he writes, is “like the low dark levels of our minds in which the dream symbols incubate and sometimes rise up to sight like the Old Man of the Sea”.

Surfer and author Daniel Duane, writes that when “the swell and wind vectors coincide with precisely the right tide [it is] as though the friend you’ve tolerated through weeks or months of doggerel has finally learned to sing the very pulse of the world”.

William Langewiesche, in an excerpt from The Outlaw Sea, explores the human cost of shipping companies’ practice and what the freedom of the sea means in modern, mercantile terms.

Rachel Carson’s chapter from The Sea Around Us looks back to the sea’s source. For James Hamilton-Paterson, author of Seven Tenths: the sea and its thresholds, the ocean “is really less connected with space than with time, as if there were a correlation between going deep and going back… Thus the deeper one went the more primitive would be the life forms encountered, the more prehistoric and inchoate.”

In our own time, there is a growing sense of the importance of the sea. The results of the 10-year Census of Marine Life covering species in 25 key ocean areas were released in 2010. Global communications and travel now keep landlubbers constantly informed of the ocean’s shifts, from ice melt to tsunami. The probability of rising sea levels has everyone’s attention. Whaling is an annual controversy and the depletion of fish stocks is becoming an urgent issue for governments with threatened food sources. Deborah Cramer’s excerpt from Great Waters: An Atlantic Passage explores a salutary connection between wind and ocean current and agricultural communities.

Sailors and surfers have the memory of fear faced or the adrenalin rush of survival to spice their stories but in this collection beachcombers have their place too. Henry David Thoreau’s meditation on Cape Cod and Elizabeth Bishop’s poem At the Fishhouses are beautiful examples of art to be found at the water’s edge.

The short fiction includes Stephen Crane’s The Open Boat, with its sustained tension, its moments of humour and its ultimate pathos, and Nam Le’s heart-rending The Boat, from his award-winning story collection. Bradley, whose previous books include the novels Wrack, The Deep Field and The Resurrectionist, and the poetry collection Paper Nautilus, has included his own story, The Turtle’s Graveyard, in which a diver at the edge of death reflects on her bid for freedom and a joyous life. The collection closes with David Malouf’s Fly Away Peter which is also a beginning, a vignette from the past that shows a scene commonplace to us, in a way that we see afresh the wonder of it.

The ocean is azure, it is emerald, it is cobalt or flint or navy, but in Wayne Levin’s black and white photographs of sea creatures, reproduced in this collection, it is a an aura of light and shade, throwing silhouette and shape into focus.

Collecting is, at its core, the urge to preserve, preferably in a form that allows an ongoing, intimate relationship with the collection. It requires entrancement and critical faculty, but also structure. Bradley has collected admirably - allusions and echoes tie pieces to each other, building a layered and complex whole that is as varied as its subject. Like energy rolling through a wave, the shifts of pace and mood keep the reader constantly engaged. If one of the functions of a collection like this is to make us read the book from which an extract is taken, Bradley has succeeded by picking several passages that capture the imagination and then leave the reader wanting more. To learn what happened to Beryl Smeeton after she was thrown into the sea off Cape Horn, the reader will have to go back to Sebastian Junger’s The Perfect Storm, excerpted here, or in search of Miles Smeeton’s Once is Enough. I bought Kem Nunn’s The Dogs of Winter because I need to know what follows the scene Bradley has chosen.

Any editor of a themed anthology has to discard writers who are loved, for lack of space. Bradley has not included Richard Henry Dana's Two Years Before the Mast. David Lewis is mentioned in Jonathan Raban’s chapter from Sailing to Juneau but Lewis’s own writing does not appear, nor does anything by that other Lewis – Gwyneth, the first National Poet of Wales (2005-2006) who is also a sailor. William Golding, Hal Roth, Patrick O’Brian, Miles Hordern, Eric Newby, Robert Louis Stevenson and many others are missing.

Bradley warns us in his introduction that The Penguin Book of the Ocean is "a personal selection of writing” rather than a comprehensive survey. I think we shall see, probably soon, an electronic book application that will let us search a theme in online books and form our own anthologies, in the way we currently make playlists from our stored music. Bradley’s collection will be an excellent starting point.

No less varied a collection but on a single theme, Swainston’s Fishes of Australia is an ambitious, beautiful overview of the 4500 known fish species in Australia.

Swainston has taken part in scientific expeditions including surveys in the south of Western Australia and off the north-west shelf, and in Papua New Guinea. He has illustrated guidebooks on fishes and worked with institutions including the Western Australian Museum, CSIRO, Smithsonian Institution and the United Nations. He has exhibited his art in Australia, the United States and in France, and he was the subject of a documentary, Peintre sous la mer, about his project to draw, underwater, a reef in the Red Sea.

As a scientist and an artist his grand passion has been fishes. They are, he says in the foreword to Swainston’s Fishes of Australia, “form and function and habitat made flesh; they display the most extraordinary responses to the constraints of the underwater world”.

Like all painters of fish, Swainston has to contend with their changing colour – not just in their everyday signalling but the shift of pattern or hue through stress and the loss of colour in death. His usual practice is to photograph fish, draw them underwater and examine collected specimens before starting.

From nearly 6000 paintings of fishes that Swainston has made in 25 years, 1500 – all acrylic on watercolour paper – have been chosen to illustrate this volume.

An introduction gives a summary of fish evolution and geological history, fish distribution, fisheries and conservation, anatomy and physiology. A useful glossary and an index that includes common and scientific names make this volume accessible to lay fish enthusiasts.

Swainston notes that there is some differing opinion among scientists in regard to how fish species and families are classified. He has used the same sequence and grouping of families into orders as J. S Nelson’s Fishes of the World (4th Edition, John Wiley & Sons, 2006) with minor variations. He has referred to Standard Names of Australian Fishes, edited by G. K. Yearsley, P. R. Last and D. F. Hoese (CSIRO, 2006), in his lists of species, putting aside his disagreement with some of those names in the interests of consistent naming across states and territories.

Fishes are grouped by order and family and a brief outline describes families’ characteristics and distribution. Illustrations of one species, or several, of a family, are accompanied by lists of all species of the family known to exist in Australia.

It is a scholarly, exquisite, surprising volume, a catch for a collector.

This review first appeared in The Australian 3 November 2010. © Jennifer Moran 2010 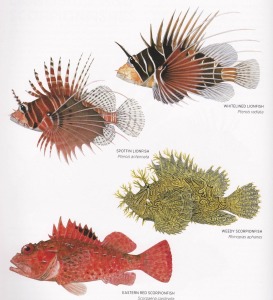