If you walk from the anchor pier to the main south pier of Brisbane’s Story Bridge on Kangaroo Point, looking north, you hear an echo to the left, a percussive beat to the right. In the mid-distance there is the rolling thunder of trucks. A resonant boom… boom… counts the cars crossing expansion joints. A shrill of cicadas keeps up their steady whine in the mangroves where foreign creepers try to smother them.

At night the best spot to appreciate the bridge is from the river walkway. Lit along its frame, its clunky metal acquires shadowed grace, the moving lights of cars signal the romance of cities, their seductive rush.

The plaque on the west side of the south pier offers its credentials. “The Story Bridge, opened on 6 July, 1940, is the largest steel cantilever bridge in Australia.” This plaque was unveiled by the then Lord Mayor of Brisbane, Jim Soorley, on 15 June 1999 to mark the final payment for the bridge on that date.

In the collection of the National Library of Australia, a drawing by Dr John Job Crew Bradfield, washed with light and shadow, dated approximately 1933 (nla.pic_an5812829), shows the City Hall rising above to the right, behind the bridge. Now, of course, the City Hall is hidden by skyscrapers. Some of the other buildings in his drawing are still recognisable – Customs House, the sheds along the water. The bridge is the focus, the perspectives almost counter-intuitive.

But even more fascinating than this drawing are the sketches with his papers held in the National Library. A pencil drawing, with an unattributed, handwritten note which says, “These could be the original ‘Pencil on paper’ sketches of the bridge”, is amongst these papers. (NLA, MS 4712, Folio Box 1, Folio 1.)

Dr Bradfield, a distinguished engineer, was responsible for the design of the Story Bridge. The original designer of the Sydney Harbour Bridge, though this claim was later disputed by some, Bradfield had an extensive list of other engineering feats to his credit, when he was hired in December 1933 as consultant engineer for Bureau of Industry, charged with the construction of a proposed bridge across the Brisbane River, with the appointment beginning at the start of 1934.

Bradfield was a Queenslander though he had spent much of his working life elsewhere. He was born at Sandgate in 1867. He attended Ipswich Grammar School where he was Dux and won a Queensland Government University Exhibition. He studied engineering at the University of Sydney and then returned to Brisbane where he worked for the railways as a draftsman and designed a footbridge at Roma Street Station. Two years later he was retrenched and moved back to Sydney where he was hired as a draftsman by the New South Wales Department of Public Works. He was made assistant engineer in 1909, and chief engineer for metropolitan railway construction in 1913, a position he would hold until 1930. He represented the government in dealings with the contractors and the supervision of construction of the Sydney Harbour Bridge. He retired in 1933.

At the time Brisbane urgently needed more bridges. In 1925 the newly inaugurated Greater Brisbane Council had appointed a commission to investigate the need for bridges and tunnels across the river. There were only two bridges across the river then – Victoria Bridge, which crossed from the south bank to near Queen Street in the city, and the Albert Railway Bridge at Indooroopilly.

According to Michael Moy’s Story Bridge: Idea to Icon (Alpha Orion Press, 2005),
Dorman Long and Company, who had built Sydney Harbour Bridge, approached the Queensland Country and National Government in 1930 with a proposal to build and operate a toll bridge between Kangaroo Point and Bowen Terrace but this was not pursued.

In the early 1930s, the new Labor Government, trying to counter Depression unemployment, committed to three building works – the Somerset Dam, the relocation of the University from the city to St Lucia and a river crossing at Kangaroo Point.

By the 1933 census, Greater Brisbane had a population of 299,782 and Bradfield had to consider the likely volumes of traffic for the bridge from surrounding suburbs as well as project these 60 years into the future.

Bradfield proposed a cantilever bridge, a stable and reliable option given the geology of the area. On the northern approach, he noted, at Petrie Bight, the river bank was concave with high, steep cliffs formed of Brisbane schist and tuff (volcanic ash compacted into rock). On the Kangaroo Point side, the riverbank was convex, the rock also schist and tuff and extended below water level. (Brisbane River Bridge, Submitting General Design, by J.J.C. Bradfield, NLA, MS 4712, Box 7.)

The minimum clear span of the bridge had to be “not less than 924 feet” between the main piers to leave the water clear for shipping. The steep gradient required for a high bridge to accommodate all shipping forced a small height compromise, but Bradfield was happy with his recommended 100ft (30.5m) above the water.

The tender “for the construction, erection and completion of Cantilever Bridge and Approaches across the Brisbane River at Kangaroo Point” was won by the partnership, Evans Deakin-Hornibrook Constructions Pty Ltd, which described itself in tender documents as a “purely Queensland Company financed by Queensland Capital and representative of Queensland Engineering enterprise”. (Brisbane River Bridge, Tender and State Awards, NLA, MS 4712, Box 6.)

The company also undertook to procure practically all raw materials from sources within Queensland, with the exception of the steel, and the steel fabrication “in its entirety would be carried out in Queensland”. Their patriotism might have won them friends but it was their competitive pricing and their ability to do the job that won them the tender. The price quoted for the job was £1,125,000 with four lanes for traffic, £1,150,000 with six. By April 1935 they had the contract. The first sod was turned on 24 May that year by the Premier of Queensland, William Forgan Smith.

Up to that point all documents refer to the Brisbane River Bridge but the invitation to the sod-turning called it the Jubilee Bridge (Invitation to Dr and Mrs J.J.C. Bradfield, NLA, MS 4712, Box 8); it was later to be named the King George V Memorial Bridge before finally being christened the Story Bridge to honour the long-serving public servant and University of Queensland vice-chancellor John Douglas Story.

Bradfield’s contribution to engineering in Australia is recognised with the naming of the Bradfield Highway over the Sydney Harbour Bridge. But another, more personal glimpse of character is to be found in his papers.

His practical work was buttressed by a romantic heart, and an eye for aesthetics. Supporting his design for the Story Bridge, he wrote: “Tree-clad hills encircle the city, here and there they tower above the level of the range – sturdy shoulders with graceful curves, which must surely express that the cantilever type of bridge, with its lofty towers and powerful river arms supporting the level span over the centre of the waterway, its back spans and anchor piers linking the bridge with either shore, will best harmonise with the picturesque and rugged beauty of Brisbane’s skyline.” (Brisbane River Bridge, Submitting General Design, by J.J.C. Bradfield, NLA, MS 4712, Box 7.)

In his account The Story of the King George the Fifth Memorial Bridge Brisbane: 1. The Site and the Materials in the Making (NLA, MS 4712/4 Item 9, Box 8), sub-titled The Story of the Brisbane River Bridge From Romance to Reality, Bradfield takes the reader on a tour through constellations, geology, evolution, design and the property of metals to set the background for his vision. He quotes the Bible, mythology and poetry. The volume is liberally decorated with photographs, illustrations and maps.

How he must have enjoyed the rainbow that appeared as the two outstretched sections were finally joined across the Brisbane River.
But standing at the foot of that southern pier, it is Bradfield’s engineering skills, rather than his flights of whimsy, that one appreciates. As Moy notes in Story Bridge: Idea to Icon, the foundations for that pier reach 40m below the park. “Open excavation to that depth was not an option because water seeping through the silt and sand would have filled the hole to river level. Work on this and the four smaller piers to the south was accomplished with an ingenious pneumatic caisson technique, utilising an upright hollow reinforced concrete cylinder with an airlock at the top and a steel blade around the circumference at the bottom.

“Workers inside the cylinder would excavate the silt and sand which would be pumped outside while the weight of the cylinder would cause the blade to work its way down. In order to prevent water from entering from the river, the air inside the cylinder was pressurised. At the start of their shift up to 10 workers would enter the airlock from the top, close the hatch, and wait as compressors pumped air into the lock. Once the airlock pressure reached that of the working chamber below, the workers would exit via another hatch and climb down a ladder to the workface.”

At the end of the shift workers would stay in the airlock for a period of time to decompress before exiting in much the same way that divers decompress when returning to the water’s surface. At the deepest part of the excavation, Moy reports, a working chamber pressure of almost four atmospheres was required which necessitated 11 minutes of compression and an hour and 43 minutes of decompression for workers, discomforts modern users of the Story Bridge might ponder as they watch fireworks pour light from it, or climb adventurously to the top of its steel arms.

A version of this article first appeared in The National Library News. © Jennifer Moran 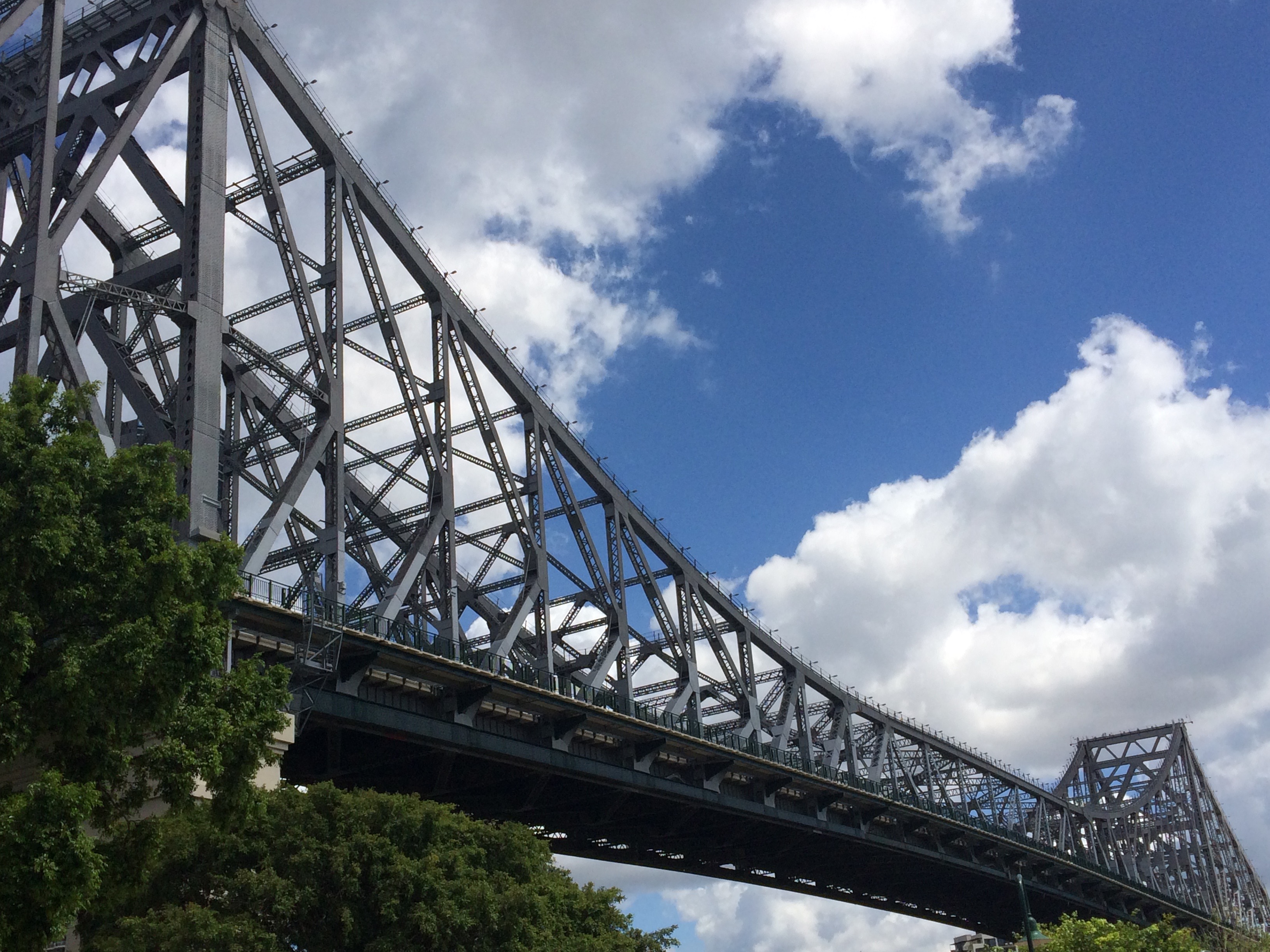